Bosquecito Road runs along the east side of the Rio Grande, starting at Pueblito to the north, and ending at Hwy 380, just east of San Antonio. It's roughly 16 miles long. I had never ridden its full distance, having heard of deep sand traps...

When recently riding the Quebradas Byway, I noticed Bosquecito Road had fresh chip seal heading south from Pueblito. The southern part of the road, at the intersection with Hwy 380, also looked paved. That was enough to tempt me us out for an exploration ride.

The chip seal is only present for the first two miles on the north side and perhaps three miles on the south side, but it was a surprisingly pleasant ride. Rumors of unridable sand were overblown, though rain on Monday definitely helped, since the mud had dried out in the valley and the sandier sections through the Quebradas were still relatively well packed.

The road meanders through the Bosque before rising above it to the east, flanking the Quebradas. It's different than the Quebradas byway, offering some time in the Bosque followed by nice vistas of the valley, though conditions are definitely a bit rough.

Expect some ruts, wash boarding and sand. That being said, finding a line that works is half the fun on a gravel bike!

For the Love of Gravel 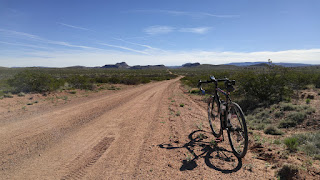